We've been living in our house for over three years and I finally hung a shower curtain in the down stairs bathroom. We've mostly been using this as a powder room and it's where the kids take baths so a shower curtain hasn't really been a necessity. But when I cleaned out my sewing space a little while ago, I went through all of my vintage sheets/linens and decided to make my very favorite flat sheet into a shower curtain. 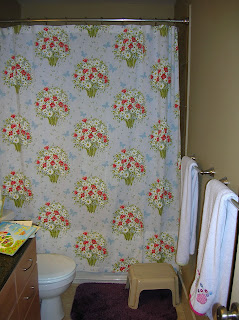 This project was so easy it's almost embarrassing. Just measure the length you need and fold over the top to create a nice wide "hem" at the top of the curtain. Mine was about 2 inches after trimming the excess. Then I fused some lightweight interfacing to the top. At this point you could stitch the top hem in place or be lazy like I was and just steam-a-seam it in place.
By far, the hardest part was measuring the grommet spacing. Now that I am smarter and wiser I would suggest just laying your shower curtain liner on top and using the spacing that someone else has already figured out. Sure wish I'd thought of that sooner. Oh well. 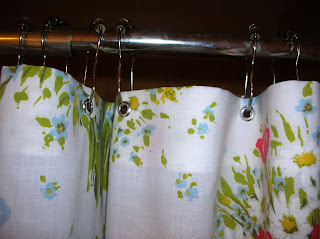 Putting on the grommets is really fun and involves hammering!
And now we have an awesome new old shower curtain. We have a clear liner on the inside. I love that I can just take it down and throw it in the laundry when I need to. And I love that I get to see this beautiful vintage sheet every day. Even the men in the household think it's pretty cool, so that's a bonus. 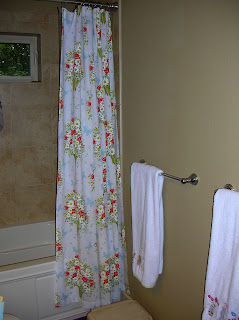 I'm planning to make a simple tie back with some of the extra fabric that I trimmed off the top, but I haven't gotten around to that yet. Hopefully, it won't be another three years before I can make it happen.
Posted by Megan at 12:19 PM