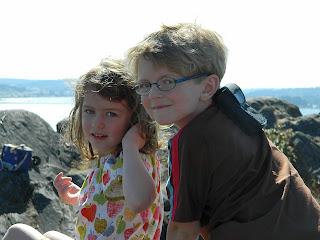 I've been debating about whether or not to write this post at all...started and stopped a few times before finally jumping in. I really try to keep this space positive - a place to escape the mundane and enjoy this amazing creative online community. But sometimes an event occurs that changes your perspective and makes you see everything in a new light.

Many of you may have seen the news about the recent shooting at the Clackamas Town Center shopping mall in Oregon. Two innocent bystanders were killed and another girl injured as a 22 year old man in a hockey mask and body armor sprayed bullets from a semi-automatic rifle. My family and I were in the mall when it happened. We were there to take the kids to see Santa and were next in line to have our picture taken. There were a few loud pops and everyone looked around trying to figure out what was happening. Then there was a loud burst of gunfire - too many shots to count - and everyone around us realized it was someone with a gun. My husband was across the concourse to videotape the kids' visit with Santa. I grabbed both Owen and Bailey and pulled them in behind the little doorway area at the entrance to the Santa area, covering them as well as I could. There was another long burst of gunfire that sounded louder and closer than before.

My husband rushed over to us as well as one of the employees from the Santa area. She kept yelling at Gary to get down, but he said that it sounded like the gunfire was coming closer and we needed to get out of there. I have never been so terrified in my life. Needing to make a decision about whether to stay hunkered down or move wasn't easy. But in that split second we realized that the gunfire had stopped for the moment so we decided to try to get out. Gary grabbed Bailey and lifted her over the fence surrounding the Santa line and I lifted Owen over. I have no memory of hopping the fence myself, but I obviously did.

We ran to the nearest store, Macy's, and got on the escalator going to the upper level. I remember yelling "Why are we going up? Why are we going up?" When we were out in the center of the mall it had seemed that the gunfire was coming from the upper level. I was terrified that we were heading up to a situation that would be worse than the one we had just left. Someone shouted back to me that there was no exit out the store on the ground level, which is true. My son kept trying to get me to stop because his shoe had fallen off and we left his winter coat on the floor at the Santa land. I kept him moving and told him that those things weren't important.

At the top of the escalator we all ran straight ahead and out the door to the parking lot. We managed to get out before a lockdown went into effect. We went straight to our car and left the area. My son was still upset about his shoe and we kept telling him that it wasn't important and we would get him new shoes.

And that's what became abundantly clear in those moments. None of the things that had seemed so important just 30 minutes earlier seemed important any more. It's so easy to get caught up in small stuff and an experience like this really brought everything into focus. My family, my babies, people are what is important. Looking out for each other, taking care of each other, being kind to each other, that's what's important.

As we watched the news coverage in the evening and got a better sense of the course of events, we realized that we were very very close to where the shooter started to fire his rifle. Apparently, after firing several bursts of gunfire in the food court area, he started to head down the mall in our direction when the rifle jammed. It was during that quiet time when he was changing out the jammed magazine that we made the decision to move and get out. I cannot bear to think of the many "what-ifs" of the whole experience.

We are so very fortunate. And our hearts ache for the two people who lost their lives and their families. I'm just sick that my children had to bear witness to such an event. There is an undeniable loss of innocence that has touched their young lives. And I'm sure we will feel the effects of this for quite a time to come.

So, please take care of each other. Let go of anything that is standing in the way of love and compassion for each other. It's a cliche, but don't sweat the small stuff. Hug your kids, or your parents, or your neighbor, or your dog. Life is such a wild and precious thing.
Posted by Megan at 10:54 PM 16 comments:

Oh my goodness, look at the teeny tiny sweater I just knit up! Well, I say "just" like it took me twenty minutes and I made it with my eyes closed. In reality, it took several days and I cussed pretty bad at one point. Seriously, tiny things are hard - they're so TINY! 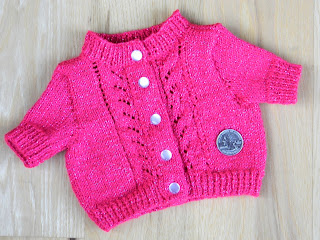 A certain little someone I know had her sixth birthday recently and was the recipient of an American Girl Doll. Her mama is a sewist extraordinaire so the wardrobe was covered - except for a sweater. That's when I got busy with some tiny knitting needles and sparkly pink sock yarn.

It's seriously small - that's a quarter on it for scale. But it was loads of fun to make and I hope it is enjoyed.

There are a few other things on needles and hooks these days, though I haven't been getting much sewing done. It all seems to go in cycles and I'm just going with the flow. Hope you are enjoying the start of this beautiful holiday season!