I Spy with My Little Eye 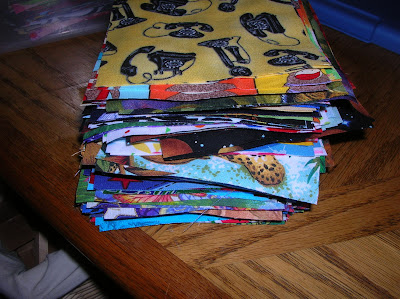 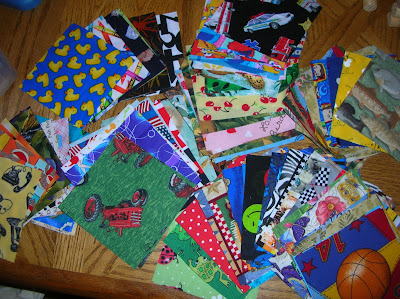 Shhhh....don't tell my kiddos that I'm making them both ISpy quilts! Collecting the various fabrics (120 or so - yikes!) was so much fun. Because I decided to make 4 inch blocks, I only needed to purchase 1/8 yards of each print with a few random 1/4 yards thrown in for good measure.
Most squares were fussy cut to get just the right motif into each block. That is A LOT of individual square cutting! I went ahead and cut two of each print so that in addition to I Spy, the kiddos can play Find the Match. In my fantasy life I anticipate hours of fun and delicious quiet but I'm sure reality will be different ("What? Another quilt? I already have one.") Still, it's been fun so far and I'm really looking forward to getting started on the sewing portion.
Both quilts will be constructed a little bit differently - one is all 4 inch blocks and the other is a combo of 4 inch blocks and 2 inch blocks. Think I'll start with the all 4 inchers first. I'll keep you posted!
Posted by Megan at 3:13 PM 1 comment: 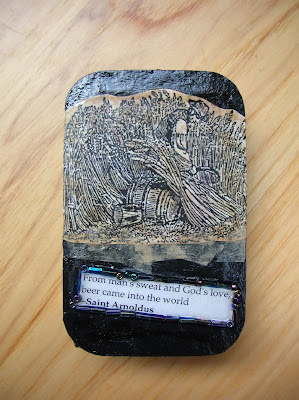 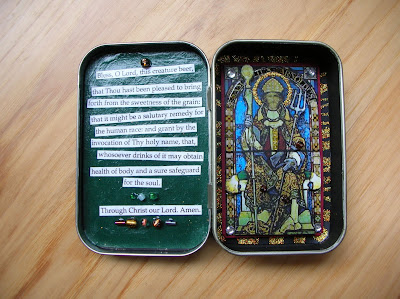 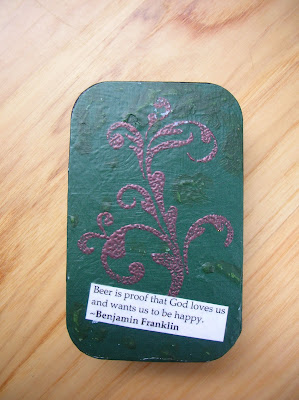 Okay, this is a little project I did for a friend. He's a big fan of beer so I made a pocket shrine to Saint Arnold, the patron saint of beer. Seriously. There's a prayer to Saint Arnold on the inside and that is an actual likeness of the man himself on the right. I wish the lighting were a little bit better so that you could see all the fabulous glitter and bling that sparkle and shine. Who knew that a humble little Altoid tin could be elevated to such a shriney state?
Posted by Megan at 11:14 AM 1 comment:

Long over due pics 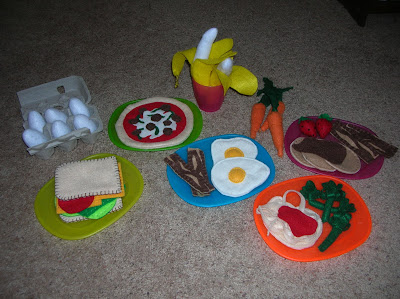 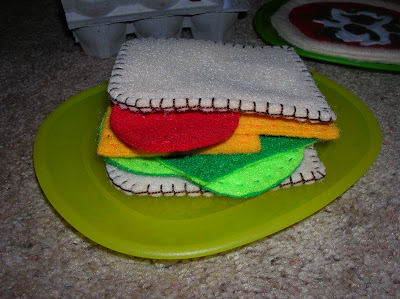 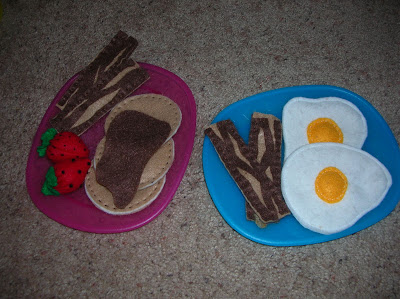 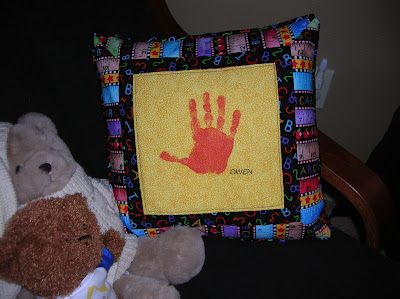 Finally some pictures of the felt food I made and gave to the kiddos this past Christmas - all heavily played with by now. Seriously, we didn't even need to get the play kitchen, they just love all the little foods!
For good measure, I've also included a photo of a handprint pillow I made for Owen to commemorate his first year of preschool. It was made with scraps from making the big auction quilt. Owen really liked the quilt but we're pretty confident that it will NOT be coming home with us, so I wanted him to have a little something. He's slept with it the past three nights - so cute.
Last night I cut out the fabric for a couple of cute little Poochie Bags from a free pattern over at Happy Zombie's AWESOME blog! Bailey picked out a funky orange print for her bag and Owen picked out these wild and crazy lizards. I'll also be making little crayon/marker rolls for them to keep in their bags along with little sketch books. It is way big fun to craft for my kids!
Posted by Megan at 1:22 PM 1 comment: 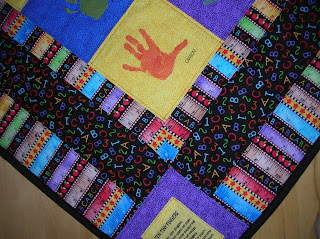 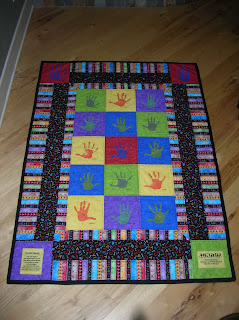 Okay, I hesitate to identify myself as a quilter because I feel like I am SO flying by the seat of my pants. I've never taken a class or anything like that. Pretty much just decided one day that I'd like to learn and I may have checked out a few books at the library. Mostly, I just figured I'd give it a whirl and see what happened. I've now made about 7 quilts and I STILL don't really know what I'm doing! In fact, I JUST learned the proper way to attach binding. I'm thrilled that my NEXT quilt will have the nice hunky chunky binding that I've been craving. And no, I'm not going to shame myself by exposing how I actually did bind those 7 or so quilts I've already made.
So, I am officially bitten by the quilting bug and can safely say that I imagine I will be quilting in some way shape or form for the rest of my life. Of course, I'll get a heck of a lot more done once my precious children are a little bit older. A two and three year old don't readily offer up much free time for quilting pursuits. I'll have to be content with adding to my little fabric stash and dreaming about projects in my future.
Anywho, this is a quilt I made for Owen's preschool fundraising auction. I am the first to admit that this is best classified as a "rustic quilt." Getting it completed on time was way more important than making sure every little stitch was perfect (HA!). One of the other mommas and I got all the kiddo's handprints as well as the teacher's and I whipped this little puppy out in about two weeks. I actually think it looks pretty cute. I sure hope my husband and I aren't the only ones who bid on it.
So, anyone know of a good afternoon nanny who can watch my kids so that I can go play with all my cute fabric?
Posted by Megan at 1:27 PM 1 comment:

Okay, I knew it would happen eventually, but I was really not prepared to have to deal with bullying amongst the preschool set. We've been experiencing a little drama at school where another little boy is giving Owen a tough time. For the most part, Owen seems to be handling it all pretty well and we aim to keep it that way. We go to a great little cooperative preschool so the "chain of command" isn't quite the same as it might be in a different setting. For example, we can't just go to the principal and ask to have this other kid moved to a different classroom. There are only 15 kids in Owen's class and there's one classroom. On the plus side, the teacher is awesome and is completely aware of the problem, as is the other kiddo's parents. Hopefully, this will be a minor bump in the road.
Anyway...happier things. We had a great time at the indoor park today - especially nice since it was raining cats and dogs most of the day. Owen had fun with the tricycles and every other toy he could get his hands on. Bailey was very content to rock in the big thing we call the rocky fish. I swear, give the girl something that rocks and she's all set.
After indoor park we went to story time at the library, another good rainy day activity. We returned some books and got a bunch of new ones and they both did pretty well considering libraries are supposed to be fairly quiet places.
Came home, did the lunch thing, the quiet time/movie thing and the nap thing. Then had pizza for dinner - a favorite in these parts - and made homemade cookies. A good, busy, fun day.
And is Owen adorable in his glasses or what???
Posted by Megan at 8:39 PM 2 comments: 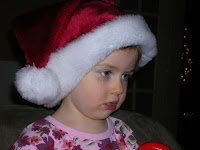 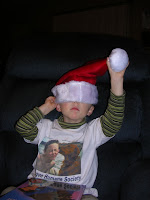 I am happy to report that we are all alive and well! Seriously, I blink and months have passed. It's surreal.

Let's see...Thanksgiving was great. Yummy turkey and fixings had by all. Christmas was fabulous. The kids really seemed to "get it" this year and I was finally able to use the whole "You better behave or I'm calling Santa" thing for a few weeks. It's sad but true that Owen has a great deal more respect for Santa than for me. Owen exchanged valentines with the kiddos in his preschool class and still has his little paper heart filled with everyones little cards and notes. He loved it. And now here we are in March. We'll be setting leprechaun traps next week to see if we can catch one of the little buggers. I'm guessing they'll escape but maybe leave some chocolate gold coins so we don't feel too discouraged.

In other news... part of why it has been so long since I've had time or inclination to update here is that we've been dealing with some health issues. Owen was diagnosed with JIA - a form of juvenile arthritis. After several weeks of complaining about pain in his foot (along with swelling and a limp) we took him in and after a few referrals were sent to a pediatric rheumatologist. He immediately diagnosed JIA and Owen had his first joint injections in November. He experienced relief almost immediately and has since become a new child. He was always somewhat physically tentative but now he's a regular monkey/mountain goat. It's thrilling to watch him run and jump and play. What a joy!

He has been in for a couple of follow-up appointments and goes in again on Monday to check on his progress. Another part of JIA is going in for eye exams every three months to check for complications that can lead to blindness if not caught quickly. While Owen's eyes are fine with respect to the arthritis, we did discover that he is farsighted in one eye so he has had to get glasses. He picked them out and has been great about wearing them. I wear glasses too, so I think he thinks it's kind of cool to wear glasses just like mommy does.

Let's see, what else can I ramble on about? How about Bailey! She's awesome! She's in a little gymnastics class right now that mostly consists of running around a gym and playing on the equipment while I run around after her and do all the heavy lifting. She also did a messy art class and loved every minute of it - especially the "messy" part.
What can I say? I love my kiddos.
Posted by Megan at 8:30 PM No comments: