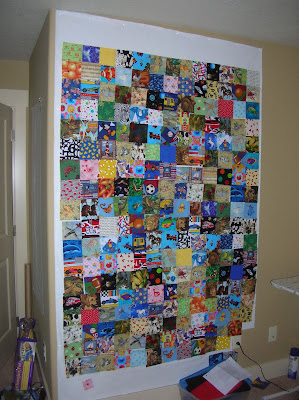 Well, doing the I Spy quilt forced me to rearrange my work room and finally put up a design wall. YAY! There was no way I was going to just start stitching those squares together without knowing that I wasn't going to end up at the end with a big clump of dark ones in one area or two matches close together.
Did I mention the whole matching thing before? Well, my big boy is kind of enamored of matching things and finding pairs so I made two squares of each pattern for him to "spy" and then match. I really like how it worked out for a few reasons. One, it meant two games in one quilt. It also meant that I could get more bang for my buck when acquiring fabric. There are something like 120 different prints in the whole thing. I would have had to double that if I hadn't done the matching thing. Oh, and a side note, by making 4.5 inch squares, I was able to get away with only getting an eighth of a yard of each print. From that I was usually able to fussy cut at least four squares, sometimes more. So, after my eyes adjust back to normal from making this one, I've got another one all cut out and ready to assemble for little sis. I was thinking about making one for next year's preschool auction, but I have to admit that I don't think I've been bit by the I Spy bug. I'm glad to be making these ones, but I'd rather get back to my other stuff. I'm so selfish!
Anywho, spent a good amount of time last night stitching away on this puppy. The entire quilt top (with red and black borders) will probably be finished by the end of the weekend. This is probably where I should admit that this is the first quilt top I've done pressing my seams to one side instead of just open. I'm sure there are still times when I will press open but it really does make it easier to match up those intersecting seams. It's fun to be a beginner - there's always cool stuff to learn and try out!
Posted by Megan at 1:25 PM