We had a great weekend for the Jingle Bell Run/Walk for Arthritis! Owen performed handsomely in his duties as Junior Grand Marshal!
The day started at the World Trade Center in downtown Portland. The courtyard was beautifully decorated with these huge lighted snowflakes and there are tons of people in costumes and ugly holiday sweaters (for the ugly sweater contest, of course). 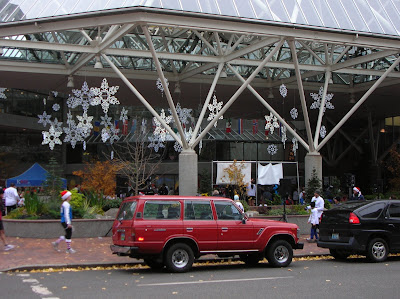 We were introduced and went up onstage and Owen spoke into the big microphone to say, "Thank you for helping to stomp out arthritis." Adorable.
But I'm getting ahead of myself...
Because the weather can be a bit, shall we say, unpredictable this time of year (i.e. two years ago we missed most of the event because of an ice storm that had us stranded until our driveway thawed), we decided to get a hotel room closer to downtown for the night before the run. Once the hotel found out that Owen was the Junior Grand Marshal, they went all Spirit of Christmas on us and upgraded our room, had a welcome sign for Owen in the lobby, gave him some awesome toys (Spiderman! dinosaurs!), and had the most insane chocolate cake waiting for us in the room. 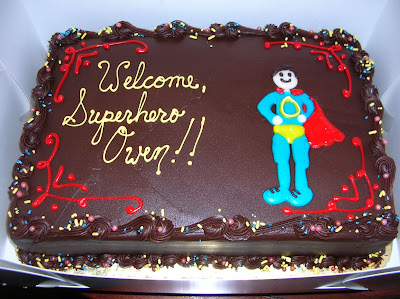 We were stunned! There were even a few people at the hotel who were participating in the run.
So... Once we got to the run, Owen's team was honored to be the top fundraising team for 2011! Thank you so much to everyone who helped by making a donation to Owen or his team. We were astonished to raise over $6,000 for the Arthritis Foundation! 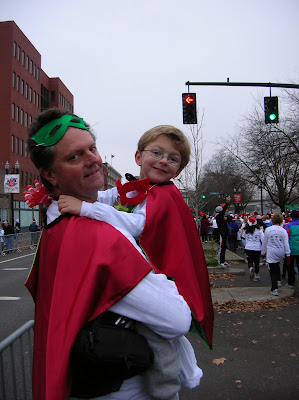 We all ran the 1k kids fun run, which just confirmed for me how woefully out of shape I am. After that, Owen got to blow the air horn to start the 5k runners. And he even got to give the medals to the top men and women finishers. 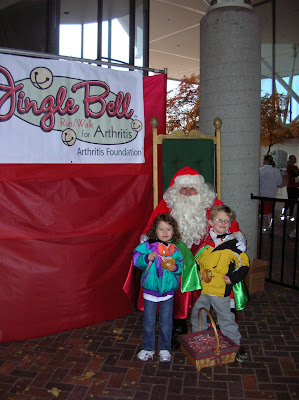 Even Santa couldn't miss the festivities so the kids got to get their picture taken with the big guy - though Bailey was infinitely more interested in the big basket of candy canes. I think she ended up with about 7 of them.
And this was what things looked like for the ride home. A thoroughly satisfying adventure. 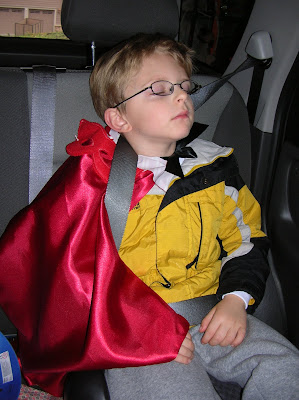